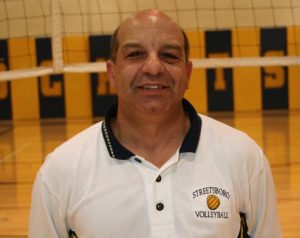 After graduating from Brecksville High School, Bill met his wife, Betsy, who became the head coach at Maple Hts. They shared a love of the game and would coach with and against each often.  Bill attended the University of Akron where he earned his School Psychologist’s Certification.  After several years of taking assistant positions and brief Head Coach positions at Kenston, Laurel and Field school, Bill was hired at Streetsboro High School in 2000, where he coached and worked as a high school counselor until 2014.   During that time period Bill’s teams won a District championship and 6 League championships in a row. He amassed over 260 varsity wins.  Bill was also named Coach of the Year 4 times.  He felt much of his success came from his and his players involvement in the Junior Olympic program.  Several of his girls went on to play at the collegiate level.